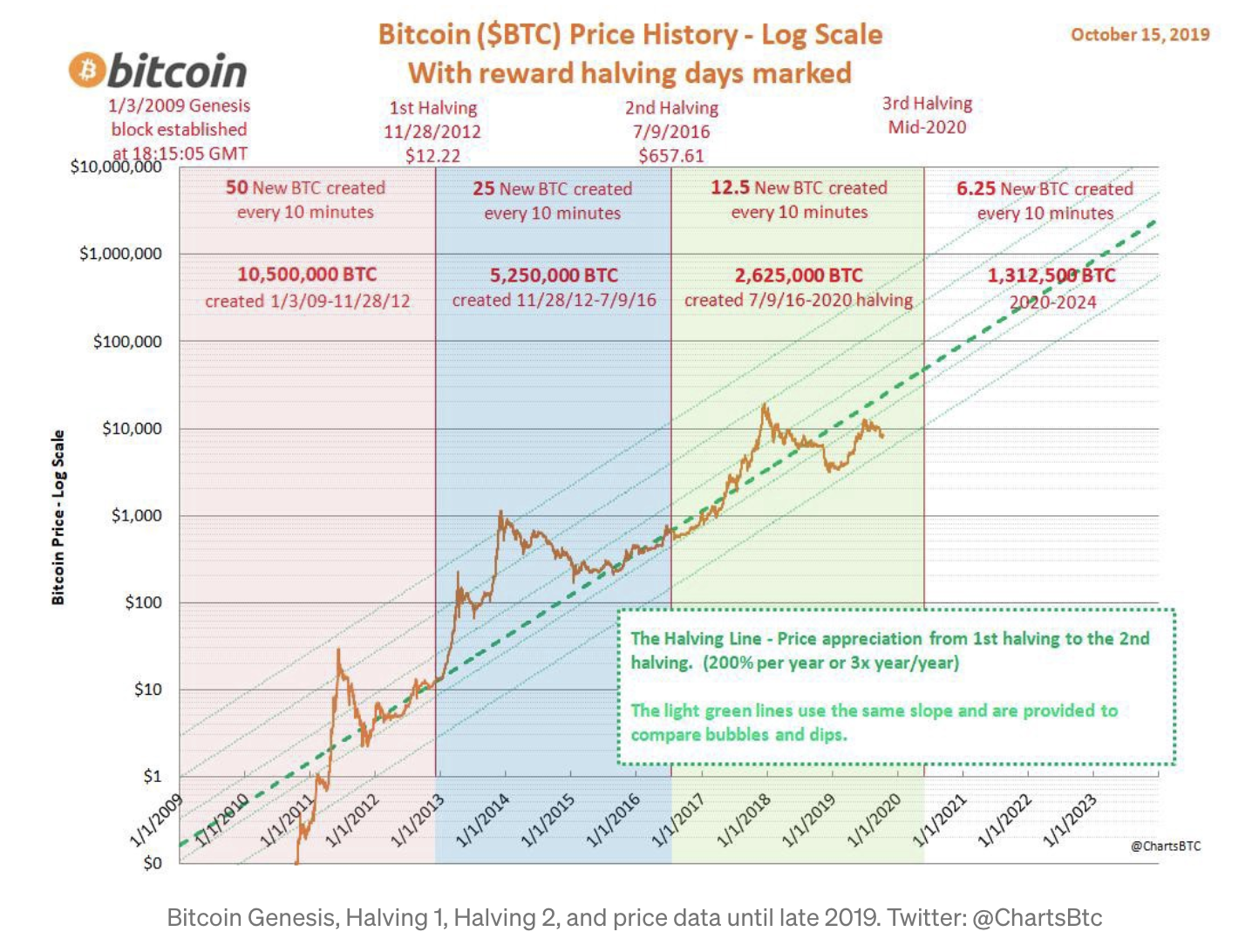 My objective is to break down what exactly is a halving, why it matters, and what impacts it will have on the market and (because I’m a horrible person) on price. First off the correct term is “Halving” not “Halvening”. Now that that’s out of the way, let’s begin!

What is a Halving?

To begin we must first understand how bitcoins inflation works and what it means when Bitcoin, or any other digital asset, is “halving”.

Bitcoin has a limited supply of 21,000,000 coins out of which 10.5 Million (or half) were released during its genesis. Every ten minutes since then the Bitcoin blockchain has been creating sections called Blocks that hold the transactions from the last 10 minutes along with a new batch of Bitcoin that are being released into circulation, this is also known as Inflation. Mining is the act of miners finding these blocks and providing the power to solve the algorithms guarding the block in hopes of unlocking the coins as a reward.

When Bitcoin first released in 2009 the blocks each had a bonus of 50 bitcoin within that was being released as rewards to miners. Every 210,000 blocks since the genesis block (block 0) the reward that is given is halved, which is why it’s referred to as a halving. In 2012, when the first 210,000 blocks were mined the reward dropped to 25 bitcoin per block. This automatically reduces the available supply to miners and they now have to provide more power to perform the same amount of work while competing among other miners for each block. This is because along with the distribution rate being halved the difficulty of solving the mining algorithms is doubled.

In July of 2016, Bitcoin experienced it’s second halving at the 420,000th block dropping the reward to 12.5 bitcoin every 10 minutes. At the time of writing, the next halving is expected to occur in May of 2020.

Let’s regroup. So far we know three important things, first, Bitcoin has a limited supply that is distributed through blocks to miners, secondly, this supply inflates at a decreasing rate over time, and third, Bitcoin has experienced only two halvings in its history.

Why Do Halvings Matter so Much

If you’ve been involved with Bitcoin or have Googled it in recent times you’ll notice a trend of people referencing the halving. With the 630,000th block scheduled for May 2020 the difficulty to mine bitcoin will double pushing a lot of miners out of profitability. The inflation rate will also reduce to 6.25 Bitcoin every 10 minutes, so each miner will now have a reduced supply of Bitcoin coming in. This will cause a natural reduction in available supply to the market. Assuming miners sell 50% of their Bitcoin to cover costs and keep the other 50% then the available new supply available on exchange markets will also drop in half. They will also have to sell the half they are receiving at double the cost to mine in order to maintain the same margins.

A doubling of the power required to mine each block is an ideology meant to help sustain and scale a blockchain. Early adopters are rewarded greater for supporting a chain that is in it’s infancy. Once the chain matures it reduces its inflation rate in a direct attempt to bolster price and give those with vested interest more reasons to keep supporting the growth and scalability of the network.

What Impacts Will the Halving Have on Price?

Based on the last section we know that the Bitcoin halving is going to reduce the available supply to the market. This, based on the theory of supply-demand should have a long term positive impact on price. Demand, however, affects the rate at which price inflates and deflates at a much more dramatic speed.

With the global tensions skyrocketing, the US/China trade war, and multiple developing countries’ economies collapsing (Turkey, Argentina, Venezuela), there has been more interest in Bitcoin and digital assets as an alternative form of reserving wealth not tied to the political ecosystem of one’s country. This is a potential increase in demand as digital assets are introduced as solutions to the people of the world as an alternative.

But since humans and their demands are fickle, let’s ignore it for now and focus on the historical impact of previous halvings on price. Based on the chart below we can see a a pattern that occurs around each halving. Bitcoin halves (in this case we will reference the genesis block as an event equivalent to a halving) and shortly after appreciates into a bubble, retraces into a correction, then remains fairly stable before repeating the cycle.

Let’s tie what we learned to this by looking at the halving in late 2012 as an example. Bitcoin halved and now miners were receiving 25 coins per block rather than the 50 they were before. People mining bitcoin using their everyday computers were almost entirely pushed out of relevance and now you needed a small data room to generate real profit. With this reduction in supply we see an uptick of almost 100x in price within a year.

By taking these examples as reference we can draw the conclusion that when the halving occurs in 2020 we should see, at minimum, a retest of the previous maximum price within one year of the event as long as demand stay relatively constant. An increase in demand could cause the “bubble” phase of growth to far exceed what was seen after the halving in 2016.

Thanks for reading and we hope this was helpful! This article was brought to you by Sazmining, a leading US based Bitcoin Mining operation that offers a 360 approach to cryptocurrency through joint venture mining, consulting services, and treasury management to help partners and investors navigate the financial aspects of cryptocurrency management.

There’s a lot of growing pains with nascent industries such as blockchain and digital assets, but the core of the problem lies around the lack of education. Our goal is to help make things easier to understand. Please follow, like, share, and sign up on our site Sazmining.com to contact us for one of our services