Bitcoin Mining Around the World 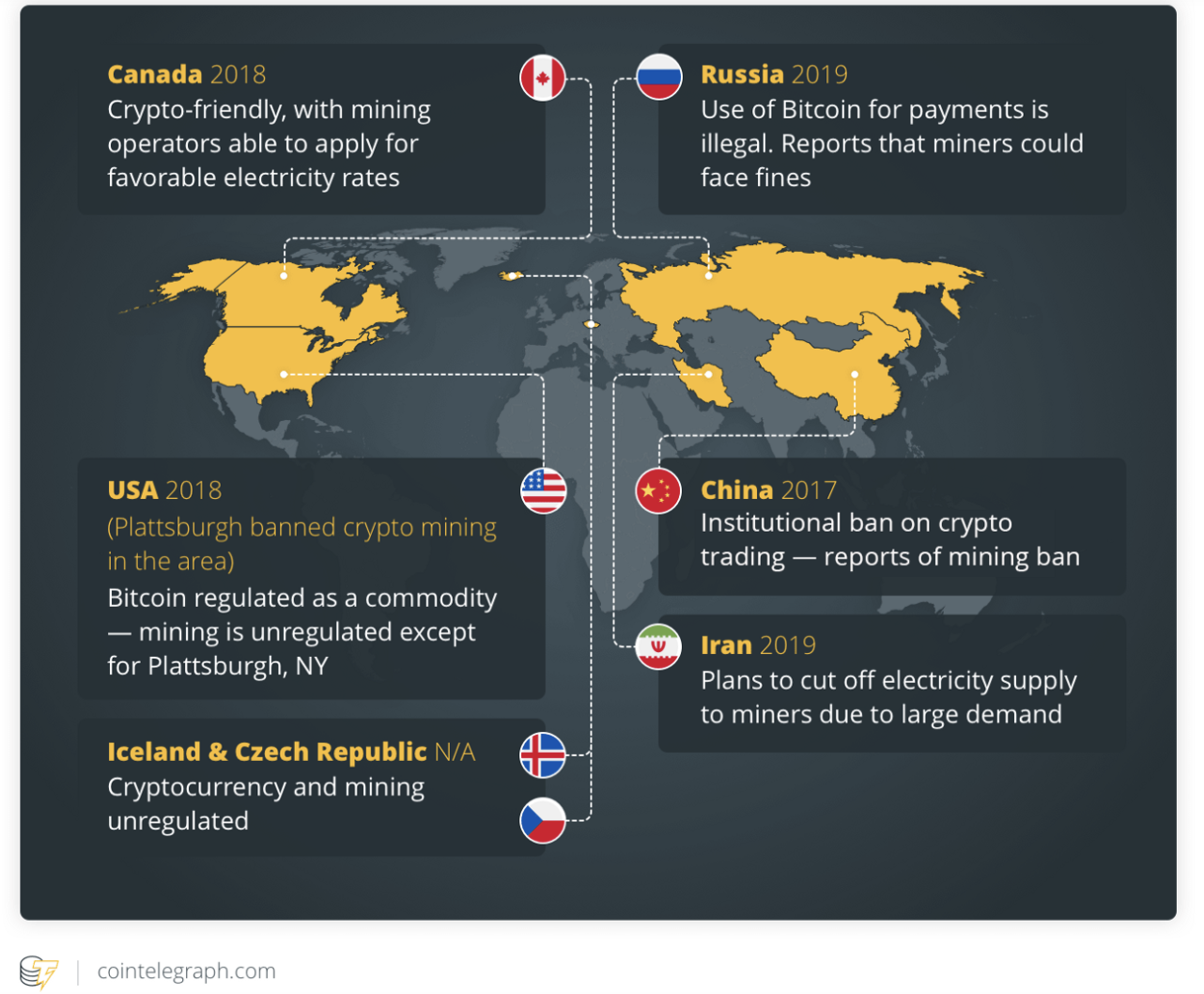 The Bitcoin mining hash rate has been on a steady increase since December of 2018 (seen below). These are encouraging signs for the mining ecosystem despite pressures on a number of fronts. Price volatility and regulatory efforts have been notable obstacles, but haven’t been enough to stop the industry’s growth yet.

On July 1, amid a soaring price gain by Bitcoin, the mining hash rate surpassed 69 quintillion hashes per second. The Bitcoin mining space has marched on over the last two years through a harsh regulatory environment that’s proven difficult for the cryptocurrency industry as a whole.

China has had an interesting rhetoric surrounding cryptocurrencies over the last few years. The government has drawn a line on trading by banning Bitcoin trading, initial coin offerings and crypto exchanges.

Despite the bans on the trading side, China’s Bitcoin mining scene is the biggest in the world, with Chinese mining pools reportedly mining potentially 70% of all the coins created yearly. The reason for this dominance is largely due to the massive surplus of electricity in the country. This is evident in the Sichuan province, which is considered the Bitcoin mining capital of China. This surplus of electricity has led power producers to encourage companies to set up operations and exploit the untapped energy supplies.

The dominance of China in Bitcoin mining could be disrupted if the regulations that were suggested in April of 2019 come to fruition, with a government agency lobbying to ban crypto mining outright in the country. Reports in 2018 also suggested that many mining operators were looking overseas amid growing pressure from the Chinese government.

Russia has a more relaxed approach to Bitcoin and cryptocurrencies, but still do not have a definitive regulatory stance on the space. Bitcoin is not regulated, but its use as a payment option for goods and services is illegal.

Anatoly Aksakov, the chairman of the State Duma Committee on Financial Markets, told local media outlet TASS that the cryptocurrencies created on open blockchains were considered illegitimate. At the same time, Aksakov stressed that it is not illegal to hold Bitcoin in Russia if the cryptocurrency has been bought or acquired outside of the country.

Iran’s government has taken a stern stance toward the crypto mining industry in the country due to a massive increase in electricity usage. The Iranian energy ministry believes that mining operations are to blame for an irregular 7% spike in electricity consumption amid fears of its grid taking undue strain and intends to cut power to mining operators until it has approved new energy tariffs.

Given the increase in mining activity and the profitability in Iran, the country’s deputy energy minister, Homayoun Haeri, suggested that the billing of mining operations should be the same as charges for power exports in June 2019. The mining scene in Iran will have to endure a few months of uncertainty until the new electricity tariffs are approved by the Iranian government. It is a blow for a country that is looking to cryptocurrencies as a means to bypass harsh economic sanctions that have hampered its ability to trade with the global community.

Canada positioned itself as a crypto-friendly country that is openly providing opportunities for mining operations. The country classified Bitcoin as a commodity, which makes users liable to pay tax, depending on how they acquire and use the crypto. If Bitcoin is received as income, it is taxed as such, and if they hold it as an investment, they pay capital gains taxes.

Cryptocurrency mining is also taxed, depending on whether the operation is run as a business or a hobby. The latter is considered a nontaxable event. While the trade and use of cryptocurrencies are welcome but controlled in the country, the mining scene has been nurtured to a far greater extent.

In June 2018, Hydro-Québec introduced rules that required cryptocurrency mining companies to bid for electricity. Their request would need to be substantiated by business cases. Almost a year later, in April 2019, the Régie de l’énergie released new rules for the process of cryptocurrency miners gaining access to electricity.

Hydro-Québec was ordered to allocate 300 megawatts to the blockchain industry, along with 210 MW supplied by municipal distributors. In order to gain access to this allocated power, mining companies have to pass a selection process. The main criteria include jobs created, payroll of these jobs, the value of investments as well as heat recovery.

The Czech Republic is home to Slushpool, one of the biggest mining pools in the world. The pool accounts for 7.5% of the total hash rate distribution on the Bitcoin network. The European country is fairly relaxed in terms of its regulatory stance toward Bitcoin and cryptocurrencies. The Czech government does not consider Bitcoin as legal tender and classifies the cryptocurrency as an intangible asset.

Iceland became a hub for cryptocurrency mining, given its cold climate and abundance of renewable energy sources. In February 2018, it was speculated that the electricity usage of the industry would surpass the total amount of energy used by households in the country. At that time, Genesis Mining was reported being the biggest energy consumer in Iceland.

America has a strong mining culture that has been enabled by a pragmatic regulatory approach. The U.S. Commodity Futures Trading Commission (CFTC) classified Bitcoin as a commodity in September 2015. There are no specific restrictions on mining activity, while several states have taken different lines of approach to cryptocurrencies in general.

A report from Crescent Electric Supply Company last year identified the cost to mine one Bitcoin in relation to the cost of electricity in each U.S. state. Louisiana was identified as the cheapest location to mine the cryptocurrency. It was followed by Idaho, Washington, Tennessee and Arkansas.

The countries above have significant mining activities, but the truth is that cryptocurrency mining has become a global phenomenon. The major factor in the location of large mining farms is the availability of affordable electricity. Following that, is the climate. European countries and places like Canada have the added benefit of being in cold environments, which makes cooling the equipment a lot easier.

The nature of Bitcoin mining, in particular, demands an increasing amount of power as the mining pool grows. The difficulty is constantly adjusted over time to ensure that one block is mined every 10 minutes. This means that mining could potentially use more energy over time, as more miners vie to receive the BTC reward from mining a block.

Late in 2018, a study suggested that the total electricity usage of global cryptocurrency mining had surpassed that of mineral mining. This is a fact that has led to heavy criticism over the past two years. Some of these concerns have been abated by another report in June 2019 that suggests that as much as 74% of Bitcoin mining is powered by renewable energy sources. This will continue to be a hotly debated topic and will no doubt continue to be a consideration for mining operators around the world.

This article is an abridged version of a well constructed piece by Gareth Jenkinson of Cointelegraph that can be found here.

We are Sazmining, a US based mining company that offers a full suite of consulting services in the mining industry. We have multiple Joint Ventures as well as our own mining operations up and running. If you’re interested in learning more about mining, investing, or setting up your own facility come check out our site!